New Haven, VT (September 6, 2006) Christopher Bray, New Haven, VT, writer, editor and book designer was recently named an award-winner at two major book competitions for his book, “The Barbier Dressage Training Companion” by Dominique Barbier. Bray was awarded an IPPY award in Washington DC at the International Independent Book Publishers Awards competition as well as First Prize at the New England Book Show, one of the oldest and most prestigious book fairs in the United States. 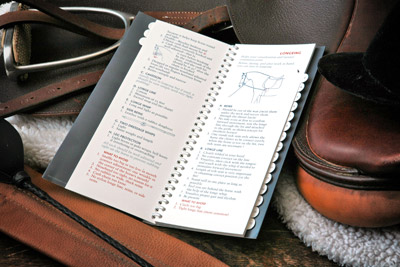 At the May IPPY Awards in Washington DC, show organizer Jim Barnes cited Bray’s Barbier book as “brilliant and informative.” The show, which drew over 3,400 entries, coming from every US state and Canadian province as well as 17 other countries, was the strongest field seen in the show’s ten years. “This year more than ever, the writing and publishing in these books has been truly outstanding, and it has been extremely difficult to choose some and exclude others,” continues Barnes.

The New England Book Show, now in its 49th year, features books from designers around the country. Bray’s entry, “The Barbier Dressage Training Companion,” was selected by the judges from over 600 entries for its “superb choice of materials for this creative, well-crafted field manual, and its elegant yet practical design.”

“Dominique’s way of working does not rely on force but on quiet power, working from the center, and clear, direct partnership with the horse,” says Bray. “The challenge was to create a design for the book that would express that simplicity and finesse, while creating a book that was actually practical and would stand up to the equestrian environment.”

To address this challenge, every detail is meant to convey refinement and ease of use. The font, illustrations, and text book are clear, concise, functional and color-coded. The book is tabbed for easy access to the information and it is small enough to conveniently fit in a pocket.

The book is printed on ultra white and washable yupo synthetic paper. “I chose yupo because I knew it would be able to withstand the abuses of the barn environment,” says Bray. “The paper has a silky, premium feel that adds a tactile experience to the book as well.” The use of yupo also ensured crisp text reproduction and brilliant color with no bleed or show through. The book is spiral bound to increase its durability.

In addition to its prestigious awards, “The Barbier Dressage Training Companion” has the unique honor of being included in two rare books collections at the University of Vermont and Boston College.

Common Ground Communications is an award-winning publishing services provider offering publishers, organizations, and authors support from concept development and editorial through design, layout and production. ‘Bringing Books to Life since 1990’.

Barbier Productions is based at Barbier Farms, home to French riding master Dominique Barbier. Dominique is the author of the best-selling Dressage for the New Age, the award-wining Barbier Dressage Training Companion, and several other books. He has also produced a series of videos and DVDs for both serious amateur riders and professional trainers. Dominique also imports and trains horses, primarily Lusitanos, at his farm in the heart of the Sonoma Valley, California. For more information about Barbier Productions, visit www.dominiquebarbier.net or call (707) 433-8026.