Educational Aid Withstands Sun, Surf, and Sand Outside of the Classroom

The Woods Hole Oceanographic Institution (WHOI), the world’s largest, private, nonprofit ocean research, engineering, and education organization, is dedicated to research and higher education at the frontiers of ocean science. In keeping with the WHOI charge, Tracey Crago, a communicator for the Sea Grant Program, had an idea over four years ago to develop scientific flashcards to aid educators in teaching their students about marine invertebrates.

She teamed up with local talent Michael DiSpezio, a marine education consultant, and Tessa Morgan Lineaweaver, an illustrator, to help bring the idea of creating lively flash cards that would be both educational and fun to fruition. Crago and DiSpezio whittled down the list of possible marine invertebrates to include, while Lineaweaver made several field trips to beaches and marine resource facilities in and around Woods Hole where she observed scallops, worms and 100 other invertebrates. After seeing real life specimens and collecting samples, Lineaweaver went on to create beautiful—and scientifically accurate—watercolor paintings for the WHOI project. 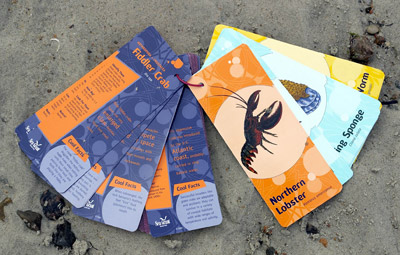 Paintings in hand, Crago turned to designer MB Flanders, of Flanders + Associates. The project took on a new life when Flanders and her team created an eye-catching way to blend facts about each organism into a compact design; what they came up with was a portable field guide to marine invertebrates. Both Crago and Flanders discovered that while field guides existed for fish, birds and other animals, a guide devoted to marine invertebrates was nowhere to be found. They selected 50 of the most common and visually appealing organisms and compiled interesting scientific information, cool facts, beachcombing tips, and a special animal checklist (see sidebar). The guide had to be portable and extremely durable to survive the sand, sun, surf and little hands using the guide to learn about the world around them.

What substrate would do justice to Lineaweaver’s colorful illustrations as well as provide the necessary durability? “We were looking for a material that would be reusable but not heavy like plastic,” says Crago. WHOI as a proponent of long-lasting, recyclable, environmentally favorable products, wanted a material that would allow their guide to follow this environmentally friendly path. Ordinary paper would not have durability, while lamination would not work as water could seep in. The ideal material would be durable, light weight, recyclable and would have a smooth texture, making it the perfect companion for trips to the beach.

The printer, Dynagraf, Inc., found the answer in yupo – an ultra-white, extremely durable synthetic paper. Crago was thrilled. “YUPO offered the exact qualities we’d been looking for—it’s durable, lightweight, waterproof, recyclable, and, when printed, the colors looked amazing. I don’t know of any other material that would have given us such great results.”

As a finished product, the Beachcomber’s Companion© is the perfect accompaniment for a hands-on trip to the beach. From squid to crabs, anemones to lobsters, the beachcomber guide is a great informative tool to enjoy the beach while discovering and learning more about the critters at the seashore. Appropriate for beachcombers young and the old, the guide comes packaged in a handy mesh bag for shell collecting and includes a wax pencil for the animal checklist.

Some Trivia from the Beachcomber’s Companion©

Did you know that squid are more closely related to clams than fish?

Horseshoe crabs have been around since the time of dinosaurs; they are more closely related to spiders than to other types of crabs?

Did you know that the carnivorous twelve-scaled worm will roll up like a pill bug – and may lose some scales – if disturbed?

The common name for Ensis directus—razor clams—came from their close resemblance to a barber’s straight-edge razor.

If you catch a squid, beware of squid “ink,” squirted as a defense mechanism to escape predators!

About the Woods Hole Oceanographic Institution

WHOI is a private, independent marine research and engineering, and higher education organization. Its primary mission is to understand the oceans and their interaction with the Earth as a whole, and to communicate a basic understanding of the ocean’s role in the changing global environment. Established in 1930 on a recommendation from the U.S. National Academy of Sciences, the Institution is organized into five departments, interdisciplinary institutes and a marine policy center, and conducts a joint graduate education program with the Massachusetts Institute of Technology. www.whoi.edu